Your Guide to The Best Mooncake(And Discounts) This Year 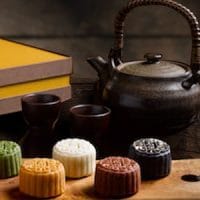 Your Guide to The Best Mooncake(And Discounts) This Year

Every year between the months of August and September, Singaporeans are sent into a frenzy looking for the latest ‘hype’ in mooncakes to buy and share with their families and friends. Hotels and patisseries are also getting more and more creative each year, coming up with new inventions to whet the appetite of consumers. We take a look at this year’s specialities, where you can get them and of course, not neglecting the best discounts you can get with credit cards.

Mooncakes are mostly sweet, but loading up on the traditional lotus paste mooncakes can get boring. So how about getting a bite of those that taste more like conventional desserts like chocolate or cheesecakes?

If that’s what you are looking for or sending it as a gift for a sweet-toothed loved one, try out the ones offered by Hilton Hotel. With its range of mini snowskin mooncakes, you can have some crumbly cheesecake wrapped in a smooth chewy snowskin, as well as a muscat white grape-infused mooncake and also another for Baileys’ lovers.

Chocolate lovers are not left out as well, with popular chocolatier Laurent Bernard’s chocolate Mooncake box. Be fast though, since they are limited in quantities! You can get those from Laurent Bernard’s outlets at Robertson Quay and the Takashimaya Atrium.

Mooncakes are traditionally paired with Chinese tea, as the bitterness of tea is said to balance out the sweet flavours of the mooncake. Since we are already stepping away from the traditions with all these wide varieties of mooncake, whose to say alcohol can’t make it into the ingredients’ list?

Don’t expect to get drunk on these goodies though, since most come with just a dollop of these to get you floating on cloud 9(we are kidding of course, you won’t even get red). But if you want something special, do check out the Gin Pineapple Snow Skin mooncake from Goodwood Park hotel, which tastes like a tropical cocktail in the form of a mooncake. Early birds can receive 15% discount when paying with Citibank, DBS and UOB credit cards from 9 to 25 August. From 16 August to 15 September, the discount is 10%.

Ritz Carlton also came up with its own snowskin mooncakes which are based on martini flavours. Who can say no to a Lycheetini and appletini mooncake?

Fruit flavoured mooncakes is a popular option since they make use of the natural sweetness of fruit to inject a refreshing flavour into snowskin mooncakes. Of course, we can’t neglect the king of fruit as well; you just need to take a walk along some of the mooncake fairs to know that durian mooncakes are perhaps one of the most popular flavours around.

Good old favourites include Goodwood Park’s “Mao Shan Wang” snowskin mooncakes as well as those by Emicakes, well known for their assortment of durian cakes and desserts. For the latter, you can even choose from the either the “Mao Shan Wang” or D24 series, depending on how bitter you like the durian paste to be. Get up to 25% off on any Durian Mooncake Box Set with UOB credit cards

For those who do not fancy the strong smell and taste of durian, there are also plenty of other delightful fruit-flavoured mooncakes to choose from, such as Intercontinental’s refreshing yuzu and sakura peach mooncakes.

If you prefer to keep the sugar level low and feast on a savoury slice instead, you’ve got choices too! Marriot Tang Plaza has a rather appetizing savoury mooncake selection, including their popular White Lotus Seed Paste with Black Truffle, waxed duck, roasted chestnut and single yolk mooncake, as well as the white lotus seed paste with chicken bak-kwa and assorted nuts. Early bird discounts last till 31 August for HSBC, Citibank, Maybank, DBS, Amex, ANZ, UOB, OCBC, Standard Chartered, Bank of China and Diners Club cardholders. HSBC, Citibank and Maybank cardholders receive 25% off all mooncakes and the others can receive 20% off.

If all these new flavours of mooncakes sound more like a sacrilege to you, you will still be able to find your traditional lotus paste mooncakes offered everywhere. Fullerton offers a box of 4 baked classics that include the traditional white lotus seed paste mooncake with and without egg yolks, as well as a salted green bean with pandan paste baked mooncake. Maybank credit card holders get a 20% off the Fullerton Baked Classics till 15 September.

Traditional mooncakes also include the teochew styled mooncakes that have a yummy yam paste(also known as ‘orh ni’) encased within an outer flaky crust. For those who love this version of mooncake, you must not miss the ones from Peony Jade. These types of mooncake have to be baked fresh as they don’t keep long like the others. For the more adventurous, you should also try out their Golden Pumpkin & Single Egg Yolk mooncake which has been a crowd pleaser for years! Enjoy 15% off all Teochew ‘Orh-ni’ mooncake till 10 September.